I came across this (mesmerizing) visualization by Chris Whong that tracks the daily slog of New York City cabbies (↬ CityLab). END_OF_DOCUMENT_TOKEN_TO_BE_REPLACED

I made an unexpected trip up to New York a few days ago to deal with apartment-related things.

The thing is a beast and it can’t be stopped.

Even though the bus ride was about 4 and a half hours each way (NYC↔DC), it felt like flying out to Japan. I lost a day, sitting on a bus covered in scratchy textile, next to strangers, cramped up against the window not quite sure how to comfortably rest my legs.

8:10 a.m. Bethesda, Md. The bus revs its engines, starts to roll, and we’re off headed towards the Beltway. Over the intercom, the bus driver relays to us some traffic information: Baltimore appears clear, making for a timely trip. “But I can’t promise anything once we get to the Lincoln tunnel,” he says.

The ride into New York City was smooth. In fact, there was no traffic at the Lincoln tunnel, the only time I’ll probably ever encounter this passageway into NYC without so many cars. In the tunnel, out the tunnel. Leaving the city was also smooth. Again, no traffic at the tunnel. The only hiccup we encountered was on I-95, somewhere near the exits for Laurel, where we slowed to a crawl for a good 20 minutes or so.

The trip itself was mostly a blur. I slept most of the way to and from New York City. I do remember stopping at the rest stop in Delaware—much nicer rest stop than the one we stopped at during my first trip a few weeks prior.

My time in city wasn’t much to reminisce about. I was there to meet with one of the two roommates and the landlord of the building we’re moving into. Then I had to run and catch the bus back to D.C. Running three blocks doesn’t seem like much, but running three blocks with streets full of people down 7th Avenue was rough. (And this was after frantically waiting for a train I thought I may have missed, and felt like wasn’t going fast enough for me.)

The sad thing about my trip, aside from the fact that I did in one day, is Macy’s.

Or rather, what I remember about it.

I had about an hour and a half before meeting the landlord and one roommate, so I just meandered up around 34th and 35th streets. Then I meandered into Macy’s.

I’ve never seen so many shoes. And people.

And while the women were shopping and digging for sales, the men just sat. It was a strange feeling, strange thing to observe.

It’s one thing to observe people sitting on park benches or short walls in the midst of outside hustle and bustle. It was strange to see the same thing within an enclosed space like Macy’s. It was a weird pause. And also a tad bit humorous. They looked really bored. And the sons with them.

And that was what I remembered from my insane, one day trip to and from New York City

Also, people tell me that I’ll get used to the sewage smell. I’m not so sure folks. It reeks.

Update: Fixed all references of NY to NYC or “city” after friendly Twitter bike friend pointed out to me that the two are distinct places. 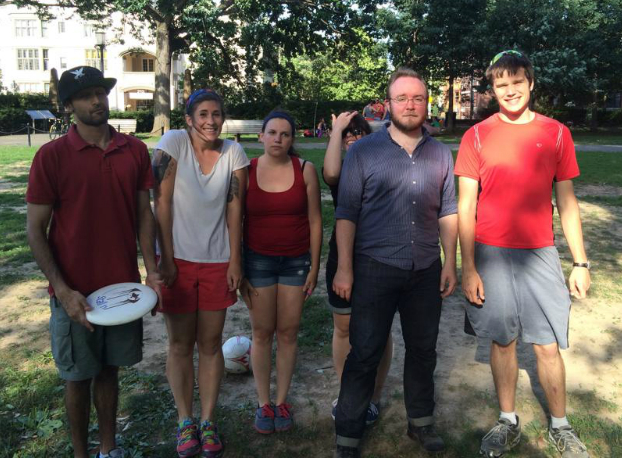 Happy 4th everyone! (or I guess at this point, it’s happy post-fourth?) END_OF_DOCUMENT_TOKEN_TO_BE_REPLACED

My time in DC is coming to a quick end, and my weekend visit to NY only confirmed the reality that yes, I am actually moving to the Big Apple to embark on the exciting adventures that are New York livin’ and grad school. END_OF_DOCUMENT_TOKEN_TO_BE_REPLACED